2418 Real-World Clinical Management of Patients with Hemophilia and Inhibitors: Effectiveness and Safety of aPCC in Patients with >18 Months’ Follow-up in the FEIBA Global Outcome Study (FEIBA GO)

Introduction: The primary objective of the FEIBA Global Outcome study (FEIBA GO) is to describe the long-term, real-world effectiveness and safety of activated prothrombin complex concentrate (aPCC; Feiba®, Baxalta Inc, a Takeda company, Lexington, MA, USA) for preventing and managing bleeding in patients with congenital hemophilia A or B with inhibitors (PwHI) across different clinical settings. This interim >18-month analysis corresponds to the report of May 2019.

Results: Enrollment was completed on December 31, 2017, with 53 PwHI from 27 sites in 11 countries (hemophilia A: n=52, hemophilia B: n=1; median [range] age at baseline: 18 [2–71] years). Total annualized bleeding rate (ABR) and annualized joint bleeding rate (AJBR) for all bleeds are shown in Table 1 for the 21 patients who received prophylaxis or on-demand aPCC and had >18 months of follow-up data. Of 15 patients who received aPCC prophylaxis, 4 (26.7%) and 7 (46.7%) reported ABRs of ≤3 and AJBRs of ≤3, respectively. All 53 enrolled patients were included in the safety analysis. During the >18 month analysis period, a total of 139 non-serious treatment-emergent adverse events (TEAEs) were reported in 29 of 53 patients (including 9 events in 3 patients probably related to treatment and 2 events in 1 patient possibly related), and 40 serious TEAEs were reported in 17 patients. One possibly related serious TEAE of acute myocardial posterior wall infarction with embolic right coronary artery occlusion was reported in a patient with a catheter port; outcome: recovered/resolved. No thrombotic microangiopathies were reported.

Conclusions: This interim analysis of real-world data at >18 months’ follow-up is consistent with experience and continues to validate the safety and effectiveness of aPCC. Long-term follow-up data over 4 years from FEIBA GO will provide further information on the real-world effectiveness and safety of aPCC as monotherapy. 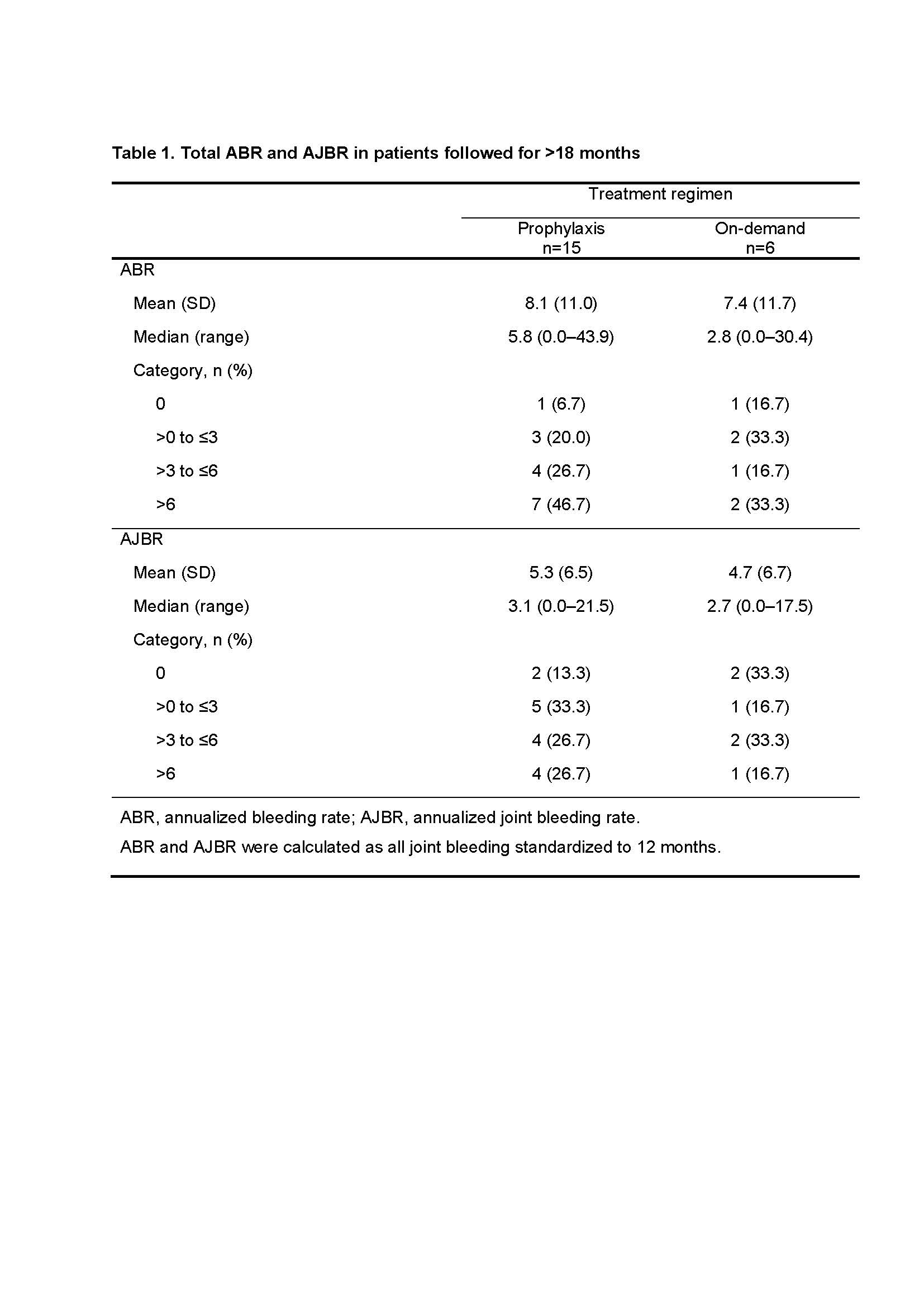