Limited stage disease accounts for 30-40% of Diffuse Large B-cell Lymphoma (DLBCL), with better overall survival than advanced stage disease, but with increased late relapses regardless of treatment strategy (Stephens 2016). Preferred treatment for these patients (pts) per NCCN guidelines is abbreviated R-CHOP followed by radiotherapy. Based on promising results of radioimmunotherapy consolidation in SWOG S0313 (Persky 2015), and of PET-directed experience by the BC Cancer Agency (Sehn 2011), we designed a National Clinical Trials Network (NCTN) PET-directed study to tailor therapy after 3 cycles of R-CHOP, to improve outcomes and decrease toxicities.

Of 159 pts enrolled, 1 was upstaged by PET, and 26 pts were ineligible - due to incorrect histology (mostly concurrent indolent or follicular lymphoma grade 3B) (21), lack of diagnostic tissue submission for central pathology review (3), and bulky disease (2).

With median follow up of 4.5 yrs (range 1.1 – 7.5 yrs), only 5 pts progressed and 2 died from lymphoma. Of 5 progressors, 3 received R-CHOP x 4, 1 was iPET-pos but declined radiation, and 1 went off treatment after 1 cycle of R-CHOP. Eleven pts died from non-lymphoma causes, including 1 pt from secondary AML (iPET-neg arm), and 1 of lung adenocarcinoma diagnosed upon iPET.

S1001 is the largest US study of limited stage DLBCL in the rituximab era, with best NCTN results in this disease subset. Only 5 patients progressed and 2 died from lymphoma. Our study confirms the distinct biology of limited stage DLBCL, with predominance of GCB origin (68%), and head and neck location (66%). Due to small number of lymphoma events, no strong conclusions about prognostic ability of smIPI, COO, DPE, or DHL, could be made.

S1001 demonstrated that 89% of pts maintained excellent outcomes after R-CHOP x 4 with PET-directed therapy. Only 11% of pts were iPET-pos and required radiation, but they also had excellent outcomes. Together with the FLYER trial in younger pts (Poeschel 2018), this NCTN trial establishes R-CHOP x 4 alone as the new standard approach to limited stage disease for majority of the pts. 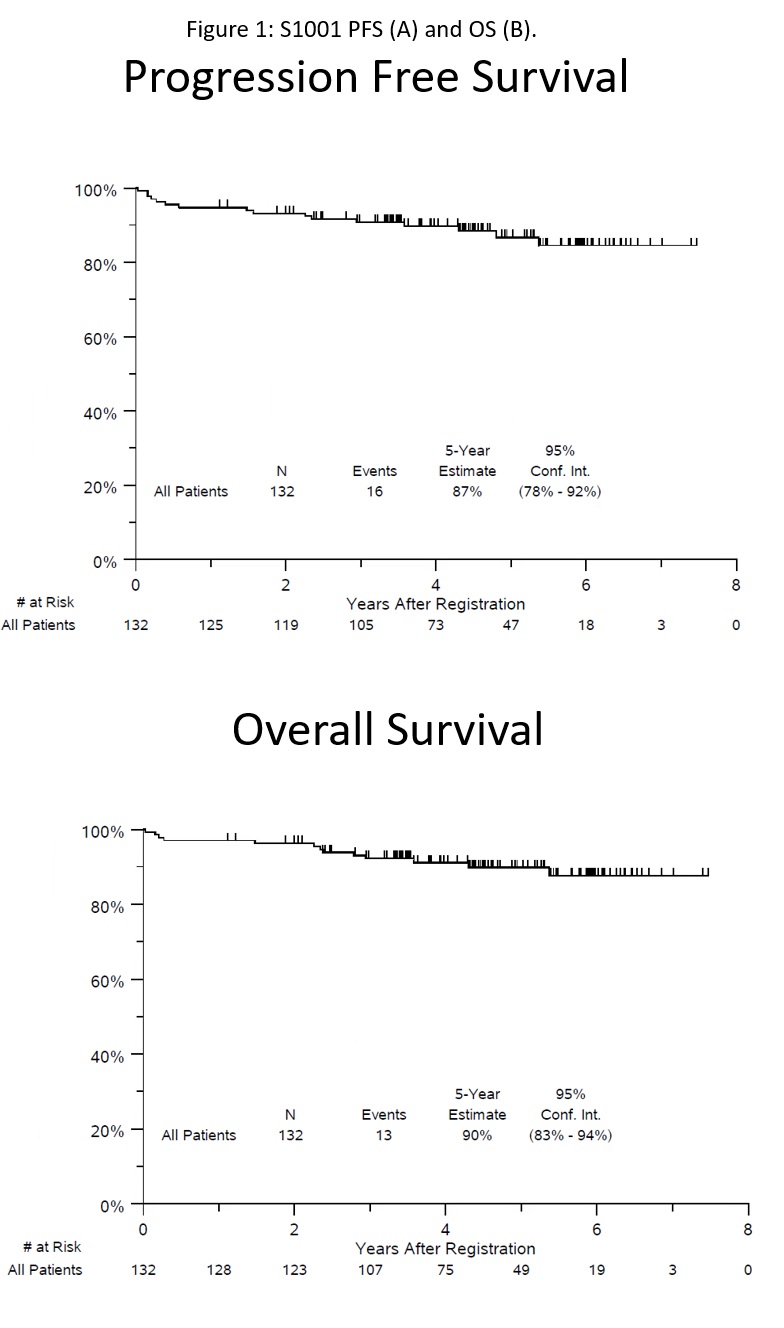