Introduction: FLT3 is a frequently mutated gene in approximately one-third of AML cases and is associated with a poor prognosis. Few effective therapeutic options exist for patients with R/R FLT3mut+ AML. In 2018, gilteritinib was approved in the US as the first targeted therapy indicated for R/R FLT3mut+ AML. The efficacy of gilteritinib was established in the ADMIRAL trial, a phase 3 randomized trial, in comparison with SC (i.e., low-dose cyctarbine [LDAC], azacitidine, mitoxantrone + etoposide + cytarabine [MEC], and fludarabine + cytarabine + granulocyte colony stimulating factor + idarubicin [FLAG-IDA]). The results from the trial indicated that gilteritinib significantly improved overall survival (OS) compared to SC with 1-year survival rates of 37% vs. 17%. To inform the value of gilteritinib, this study aimed to assess the cost-effectiveness of gilteritinib for the treatment of R/R FLT3mut+ AML from a US third-party payer’s perspective.

Methods: A cost-effectiveness analysis (CEA) model was developed using monthly cycles and a 3% discount rate to assess the incremental cost effectiveness of gilteritinib compared to SC over a lifetime horizon. The model structure comprised a decision tree followed by two three-state partitioned survival models. The decision tree component stratified patients based on whether they received allogeneic hematopoietic stem cell transplantation (HSCT) following treatment initiation. The partitioned survival components included three health states: event-free survival (EFS), alive and post-event, and death. The selected model structure was chosen because HSCT is a key clinical event that has a significant impact on treatment outcomes for the target population. The efficacy inputs (OS and EFS) varied by HSCT status. The efficacy inputs for OS and EFS without HSCT were estimated based on the ADMIRAL trial. The efficacy inputs for OS and EFS with HSCT were assumed to be the same for both gilteritinib and SC and were based on available literature (Evers 2018). Parametric survival models or HRs were used to predict probabilities of being in different health states until year 3. Afterwards, all patients who remained alive were considered long-term survivors and their mortality risk was twice that of the general population based on literature. Treatment costs (drug, administration, and hospitalization), adverse event (AE) costs, subsequent HSCT costs, medical costs for each health state, FLT3 mutation testing, post-progression treatment, and terminal care costs were obtained from public databases and literature. For SC, the same regimen composition (i.e., LDAC, azacitidine, MEC, and FLAG-IDA) as the ADMIRAL trial was considered to estimate the treatment costs. All costs were inflated to 2018 US dollar (USD). Utilities for each health state were derived from the ADMIRAL trial and disutilities for AEs were derived from the literature. Total incremental costs, total incremental LYs, and total incremental QALYs were calculated. Incremental cost-effectiveness ratios (ICERs), defined as the incremental cost per additional gain in health effect (i.e., LY and QALY), were used to assess the economic value of gilteritinib relative to SC. Deterministic sensitivity analyses (DSA) and probabilistic sensitivity analyses (PSA) were also performed to test the robustness of the base-case results.

Results: Over a lifetime horizon, the base-case model estimated that treatment with gilteritinib led to an increase of 1.55 discounted LYs and an increase of 1.29 discounted QALYs at an additional cost of $141,097 relative to SC; the corresponding incremental cost per LY gained was $90,761, and incremental cost per QALY gained was $109,741. Cost-effectiveness was most sensitive to gilteritinib cost, HSCT rate, and discount rate. In the PSA, the estimated probability that gilteritinib is cost-effective was 93.5% at an acceptable willingness-to-pay threshold of $150,000/QALY.

Conclusions: Gilteritinib demonstrated greater LY and QALY improvements compared with SC. With an ICER of $109,741/QALY, gilteritinib is a cost-effective strategy from a US third-party payer’s perspective, based on the $150,000/QALY threshold recommended by the US Institute for Clinical and Economic Review. Compared to SC, gilteritinib represents a new active treatment option for R/R FLT3mut+ AML patients that provides better health outcomes with a favorable cost-effectiveness profile. 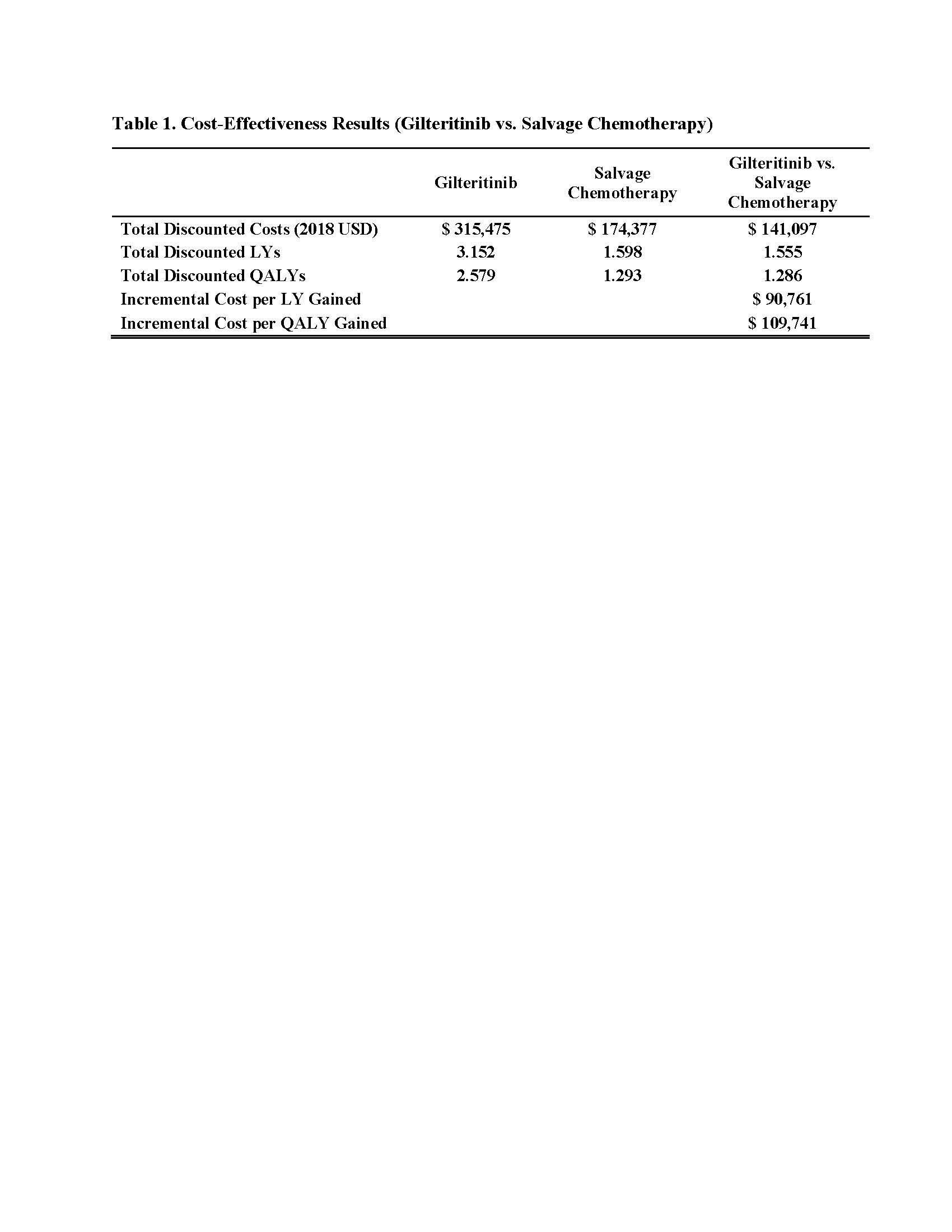