INTRODUCTION: Standard chemotherapy regimens for AML are not effective in many patients (pts), necessitating the use of targeted therapies. FMS-like tyrosine kinase 3 (FLT3), a cytokine receptor tyrosine kinase expressed in early hematopoietic precursor cells, regulates the proliferation and differentiation of these cells. FLT3 mutations resulting in constitutive signaling are common in AML (~30% of pts), including internal tandem duplication (ITD) in the juxtamembrane (~25%) and point mutations in the tyrosine kinase domain (TKD; ~5%). Hematopoietic stem cell transplantation (HSCT) remains the best chance for a cure, especially in pts with R/R AML; however, data suggest that HSCT can affect the quality of life of pts, both negatively and positively (Wood, 2016; Wong, 2016). While data regarding the relationship between pt-reported outcomes (PRO) and transplant status exist, data from controlled clinical trials, especially trials focused on pts with AML, are scarce. Gilteritinib is an orally administered, potent, selective FLT3 inhibitor with single-agent activity in R/R FLT3-mutation–positive (FLT3mut+) AML. Results from ADMIRAL, a global, randomized, phase 3 study (NCT02421939), demonstrated that gilteritinib improves response and survival compared with salvage chemotherapy (SC) in pts with FLT3mut+ R/R AML. The objective of this analysis was to examine the relationship between PROs and transplant status in pts with FLT3mut+ R/R AML using data collected from ADMIRAL.

METHODS: ADMIRAL was a phase 3, open-label, multicenter, randomized study that compared the efficacy and safety of gilteritinib therapy to SC in pts with FLT3mut+ R/R AML. In this study, pts who had a stem cell donor identified and achieved a response allowing them to undergo HSCT could do so without leaving the study. PRO instruments used in this study included the EuroQol Five Dimension Five Level Scale Questionnaire (EQ-5D-5L), Functional Assessment of Cancer Therapy-Leukemia (FACT-Leu), Brief Fatigue Inventory (BFI), Functional Assessment of Chronic Illness Therapy - Dyspnea (FACIT-Dys), and two leukemia-specific items (dizziness and mouth sores). BFI was completed at baseline (BL), Day 1, 8, and 15 of Cycle 1, Day 1 and 15 of Cycle 2, Day 1 of every treatment cycle thereafter, and end of treatment (EOT). All other instruments were completed at BL, Day 1 of every treatment cycle, and EOT. In this analysis, time-to-definitive-deterioration (TDD) values were compared between gilteritinib pts who did or did not undergo HSCT during the study period. In this study, pts in the SC arm who received HSCT were required to leave the study, though they were followed for OS outcomes; as such, PRO data for SC pts were not considered here. TDD was defined as the duration of time from the date of randomization to death or deterioration of ≥1 change threshold unit compared with BL. Change threshold units connote a clinically meaningful change to a pt and were obtained from literature, if published, or from a distribution-based method when no threshold was available from the literature. Kaplan-Meier curves with two-sided 95% confidence intervals were used to estimate the distribution of TDD. 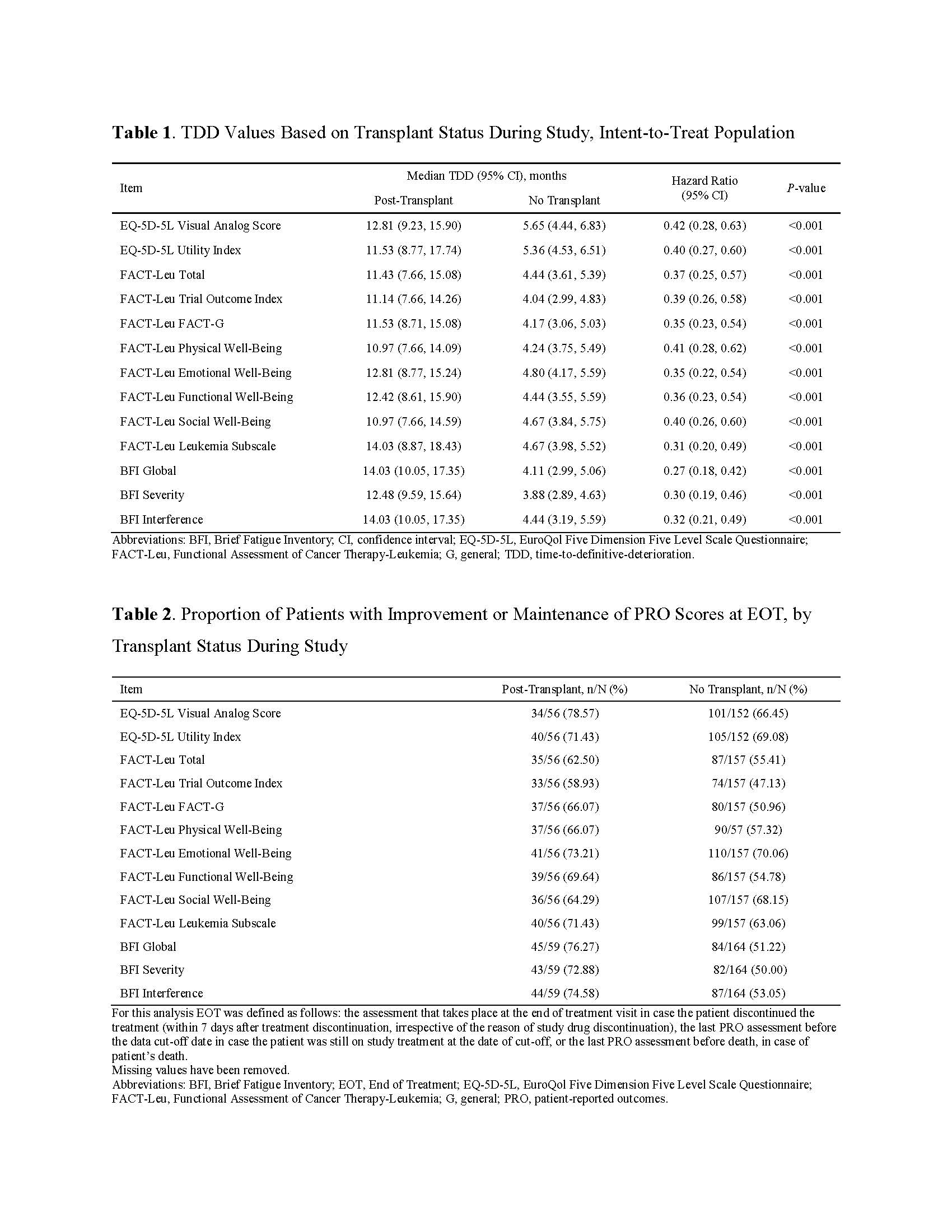