126 Polatuzumab Vedotin Plus Obinutuzumab and Lenalidomide in Patients With Relapsed/Refractory Follicular Lymphoma: Primary Analysis of the Full Efficacy Population in a Phase Ib/II Trial

Introduction: Polatuzumab vedotin (Pola) combined with obinutuzumab (G) demonstrated activity and tolerability in a Phase Ib/II trial of patients (pts) with relapsed/refractory (R/R) follicular lymphoma (FL; Phillips et al. Blood 2016). In addition, the doublet combination of G plus lenalidomide (Len) showed favorable activity and an acceptable safety profile in a Phase II study of pts with R/R FL (Morschhauser et al. Lancet 2019). We sought to determine whether Pola-G-Len might further enhance anti-tumor response in R/R FL. Here, for the first time, we present the full primary analysis of efficacy and safety data from a Phase Ib/II study (GO29834; NCT02600897) of Pola-G-Len in pts with R/R FL.

Results: At the time of the primary analysis (March 12, 2019), a total of 56 pts from the Phase Ib and Phase II populations were enrolled and had entered induction; the median duration of follow-up was 11.79 months. Baseline characteristics were: median age, 62 years; male, 59%; Ann Arbor Stage III–IV, 88%; Follicular Lymphoma International Prognostic Index high-risk (≥3), 55%; bulky disease (≥7cm), 16%; ≥2 prior lines of therapy, 77%; refractory to last line of prior regimen, 50%; and refractory to last line of anti-CD20 treatment, 45%. All pts had at least one adverse event (AE), 31 (55%) had a serious AE, and 44 (79%) had a grade 3–4 AE. The most common grade 3–4 AEs were neutropenia (28 pts, 50%), thrombocytopenia (13 pts, 23%), infections (9 pts, 16%), and anemia (8 pts, 14%). AEs leading to a dose reduction or interruption of any drug occurred in 19 (34%) and 41 (73%) of pts, respectively; the majority were modifications of Len. In addition, 14 (25%) pts had an AE that led to the discontinuation of any study drug. One grade 5 AE was reported (septic shock); however, it was not considered to be related to study treatment as the pt was receiving a new anti-lymphoma treatment after experiencing disease progression (PD). In the primary efficacy population (n=46), the IRC-assessed modified Lugano objective response rate was 76%, with a CR rate of 65% (Table). A sub-group analysis showed that 71% (15/21) of pts who were refractory to their last treatment achieved a CR. In total, five pts experienced PD, three in C1 or C2 and two at the month 12 response assessment. With a median follow-up duration of 11.27 months, median PFS was not reached.

Conclusions: Our study of the novel triplet combination, Pola-G-Len, demonstrates a safety profile consistent with the known profiles of the individual drugs. This first report of the full efficacy population showed high CR rates at EOI in a heavily pre-treated and refractory population, which compares favorably with currently available R/R FL therapies. These compelling findings support the further investigation of this triplet combination in a larger pt population. To determine the median PFS, a longer period of follow-up, through and beyond maintenance treatment, is ongoing. 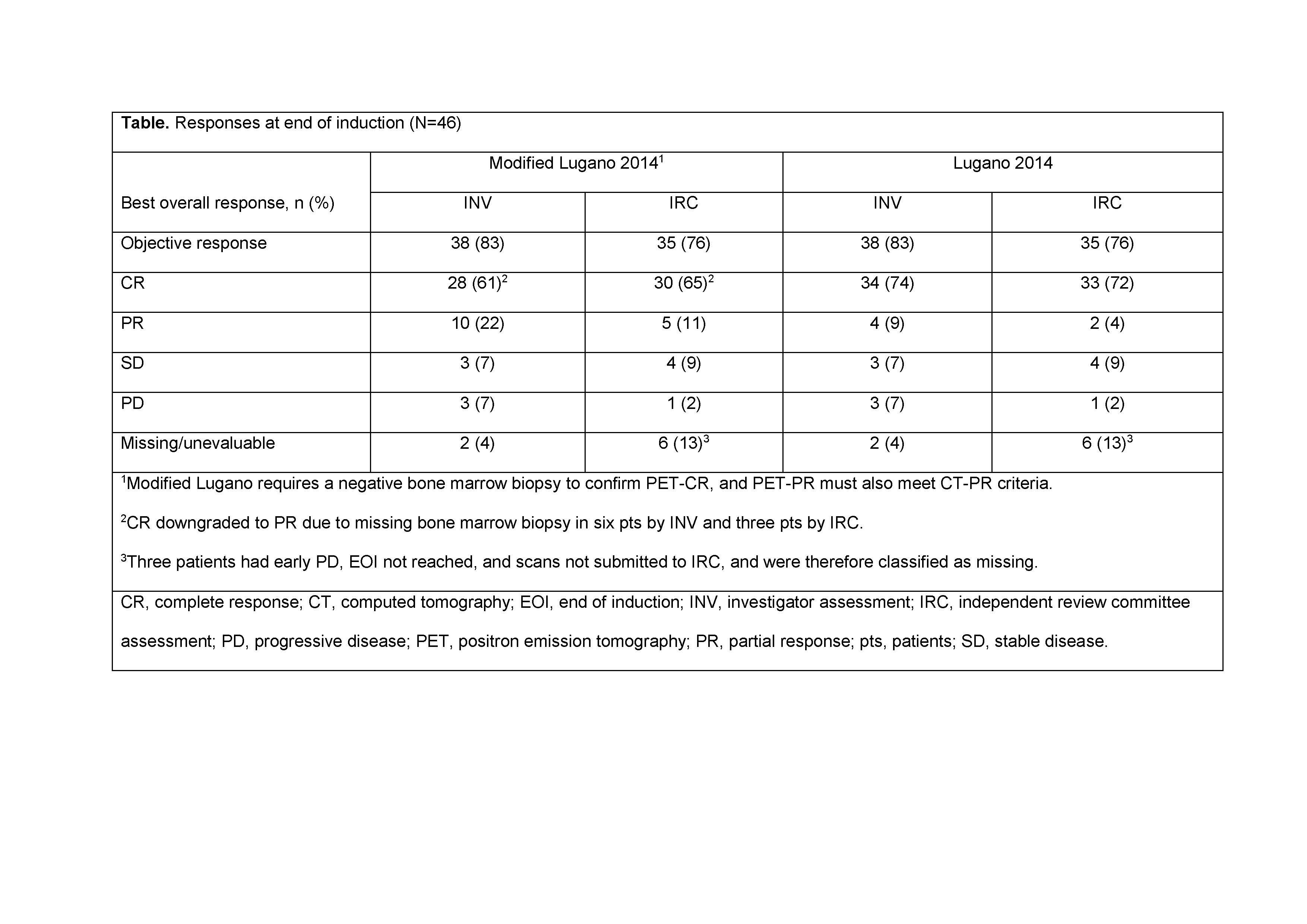 OffLabel Disclosure: Polatuzumab vedotin (POLIVY, Genentech, Inc.) is a CD79b-directed antibody-drug conjugate. It was approved by the FDA in June 2019 in combination with bendamustine and rituximab for the treatment of adults with relapsed/refractory diffuse large B-cell lymphoma after at least two prior therapies.