Background: The CD38-targeting antibody daratumumab, when combined with a proteasome inhibitor or with an immunomodulatory agent (IMiD) increases depth and duration of response in multiple myeloma (MM). Depth of remission post initial therapy as assessed by MRD predicts long term outcome in NDMM. We hypothesized that the combination of daratumumab, carfilzomib, lenalidomide and dexamethasone (Dara-KRd) would be safe and highly active in patients with NDMM. In addition, we assessed the feasibility of using MRD by next generation sequencing (clonoSEQ® method, sensitivity 10-6) to inform the use and duration of post-transplant Dara-KRd consolidation.

Results: Currently 69 pts have been enrolled, 38 have completed induction and 22 have completed post-transplant assessment. Median age was 61 (range 38-79) years, 13 (19%) had ISS 3, and 20 (29%) had high-risk chromosomal abnormalities [del17p, t(4;14) or t(14;16)]. Sixty-six (96%) pts had MRD trackable by clonoSEQ® and 100% of the expected MRD datapoints were successfully obtained. All patients responded by end of induction cycle 2, 92% of pts obtained VGPR or better after induction and 91% of patients who have reached transplant obtained CR/sCR as best response on therapy (Figure). MRD-negative remission (<10-5) rate was 34%, 70% and 80% after induction, transplant and at best response, respectively (Figure). Rates of MRD <10-6 were 28%, 45% and 65% respectively. No patient discontinued therapy due to toxicity. One patient died from metapneumovirus pneumonia post-transplant, considered not related to investigational agents. Most common grade 3 and 4 AEs were neutropenia (n=7), infection (n=6), insomnia (n=4), hyperglycemia (n=2) and rash (n=2). There were 15 serious AEs including pneumonia (n=5), fever and neutropenia (n=2), pulmonary embolism (n=1), and atypical hemolytic uremic syndrome (n=1). All 11 patients who have achieved confirmed MRD-negative remission and discontinued therapy also achieved imaging plus MRD-negative CR and none had relapse or resurgence of MRD with short follow up (0.8-7.3 months). Longer follow-up, post-induction and post-transplant MRD assessment for at least 69 and 41 pts, respectively, will be presented at the meeting.

Conclusion: This is the first report of monoclonal antibody-based quadruplet regimen with MRD-based response-adapted therapy in NDMM. Dara-KRd induction, autologous transplant and Dara-KRd consolidation guided by MRD is feasible, safe and leads to high proportion of patients achieving CR/sCR, IMWG MRD-negative CR, imaging plus MRD-negative CR and MRD <10-6. This approach can form the basis for clinical efforts to reduce the burden of continuous therapy in those with confirmed MRD-negative remissions. 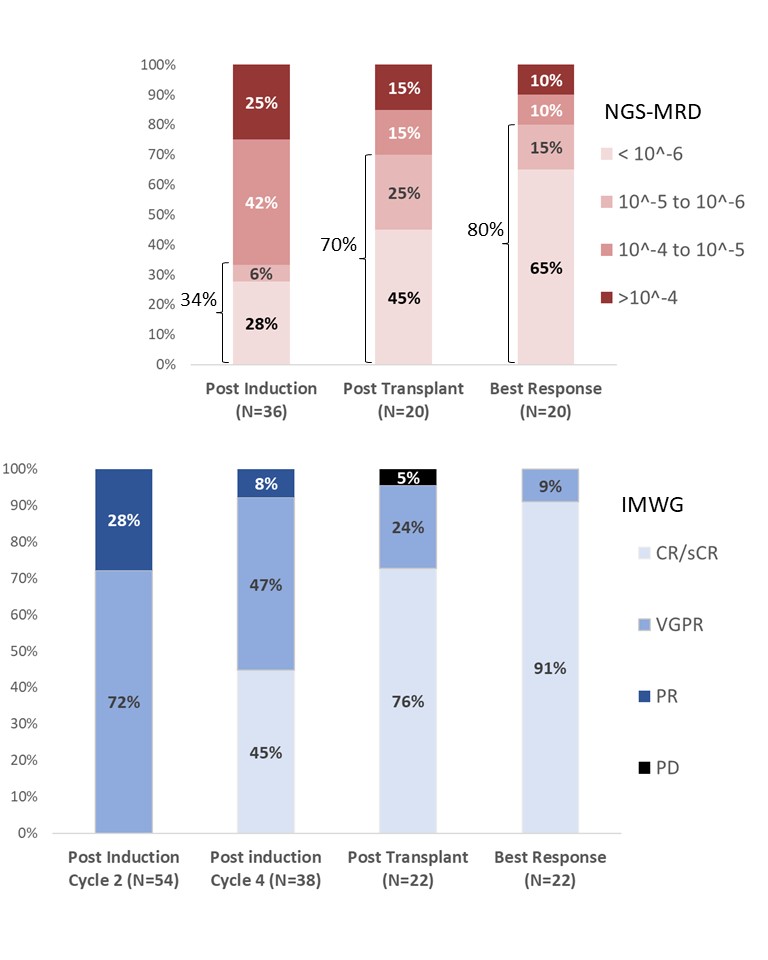