More effective therapies for treating steroid-refractory acute GVHD (SR-aGVHD) are urgently needed. In our recent phase I/II study, we showed that anti-CD3/anti-CD7 immunotoxin (IT) therapy T-Guard was both safe and well tolerated, and yielded both a high rate of CR and high 6-month OS in high-risk patients (Groth et al. BBMT 2019). Following this study, patients with SR-aGVHD were offered T-Guard via an expanded access treatment program (EAP).

We evaluated patients’ outcome after receiving T-Guard for SR-aGVHD. In addition, we examined the relationship between plasma citrulline levels (a biomarker of enterocyte mass) and the response to T-Guard in a subset of patients with SR-aGVHD of the gut, combining 16 patients from the phase I/II trial and 9 patients in the EAP group.

An EAP was started after completion of the phase I/II trial. This program was approved by the local ethics committee and the Health and Youth Care Inspectorate of the Dutch government. Adult patients with grade II-IV SR-aGVHD were eligible to receive T-Guard as their second- or third-line treatment for aGVHD. Patients with an uncontrolled infection, signs of moderate-severe chronic GVHD, and/or severe renal impairment were not eligible to receive T-Guard. Eligible patients received four 4-hour i.v. infusions of 4 mg/m2 T-Guard delivered at 48-hour intervals. In addition, plasma citrulline levels were measured at baseline and every 7 days after the start of T-Guard therapy using HPLC with mass spectrometry. A plasma citrulline level <10 µmol/L was considered to indicate severe GI-GVHD.

From Jan. 2017 through Dec. 2018, 12 patients (8 male, 4 female; median age: 54 yr, range: 20-70 yr) who had received an allogeneic stem cell transplantation for myeloid or lymphoid malignancy were treated with T-Guard. T-Guard was given as the second-line therapy to 10 patients; the remaining 2 patients received T-Guard as the third-line therapy after receiving ruxolitinib (N=1) or cyclosporin-UVB (N=1). The median time between aGVHD onset and the start of T-Guard therapy was 7 days (range: 3-55 days).

SR-aGVHD was classified as grade II, III, or IV in 1, 7, and 4 patients, respectively. Nine patients (75%) had GI involvement, and the skin and liver were involved in 6 and 2 cases, respectively. All 12 patients were classified as high-risk in accordance with MacMillan et al. (BJH 2012), and the median albumin level at baseline was 23 g/L (range: 13-32 g/L).

By treatment day 28, 9 patients (75%) had achieved a clinical response, with 5 achieving complete remission. After a median follow-up of 16 months, 7 patients were alive; the 6-month and 1-year OS rate was 75% and 58%, respectively, which was significantly higher than historical controls; Figure 1. The cause of death in the other five patients was refractory aGVHD (N=3), relapse AML (N=1), and GVHD after undergoing a second stem cell transplantation for relapse AML (N=1).

No significant infusion-related reactions were recorded. As expected, the overall rate of infection was high, but was comparable to other cohorts; 1 and 2 patients developed an EBV or CMV infection, respectively, but these were manageable. The most common potentially treatment-related adverse events were transient worsening of hypoalbuminemia and thrombocytopenia. One patient developed grade 2 vascular leak syndrome, but this was easily managed. One patient developed severe thrombotic microangiopathy with renal insufficiency, but several contributing factors other than the use of T-Guard were present in this patient, including calcineurin toxicity, severe GI-GVHD, and CMV disease.

Our preliminary analysis of citrulline levels in 16 patients with GI-GVHD showed that mean baseline levels were extremely low (4.3 µmol/L; range: 2.9-17.9 µmol/L); 28 days after the start of T-guard, citrulline levels had increased significantly in the 9 patients who achieved complete remission; Figure 2.

Consistent with our recent phase I/II trial, our expanded access program in which 12 patients with high-risk SR-aGVHD received T-guard confirms that this treatment is safe and significantly improves patient outcome. A multicenter phase III study is planned to start in 2019 (BMT-CTN 1802). 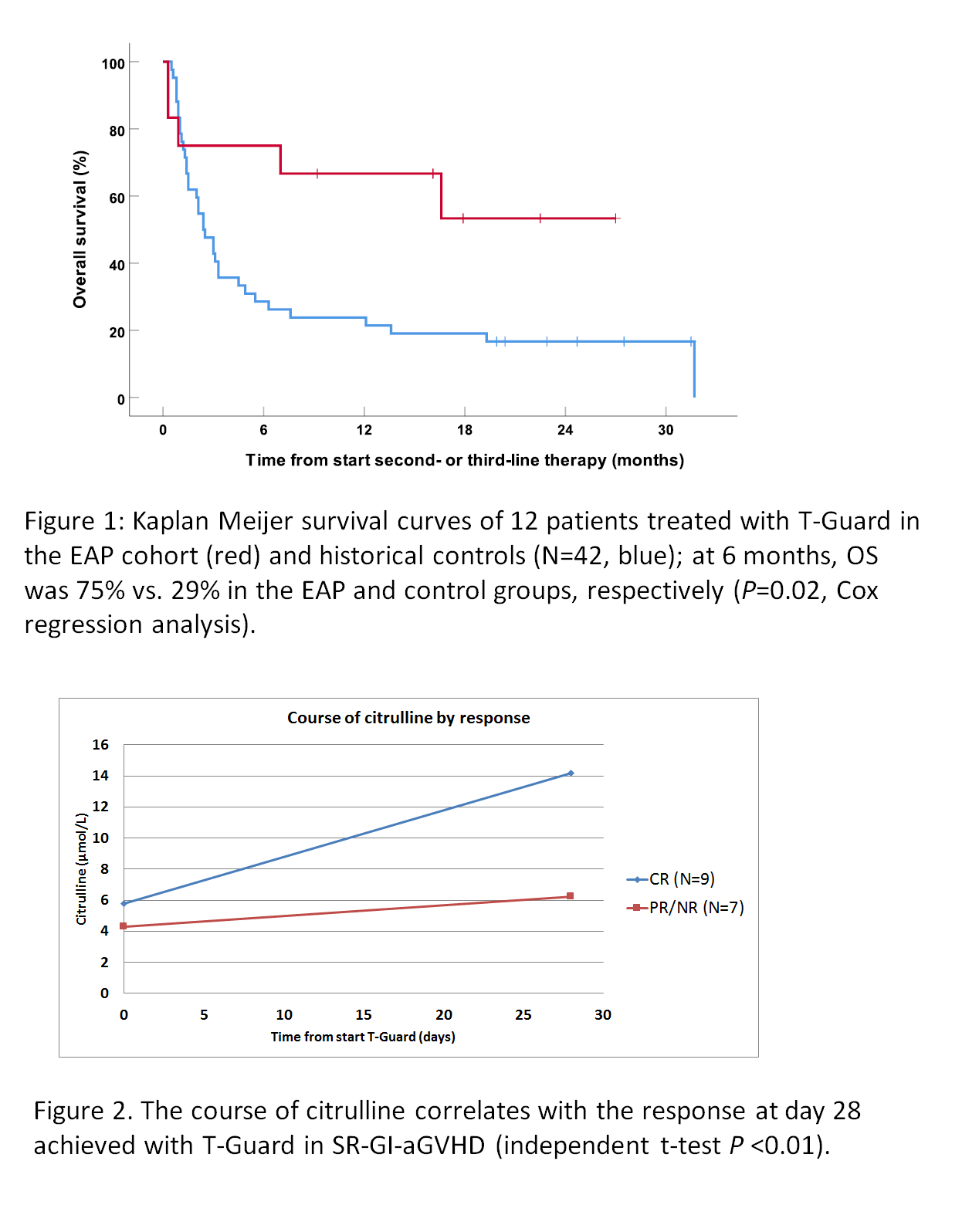