[Background] Cytomegalovirus (CMV) disease is a major complication after allogeneic stem cell transplantation (SCT). However, mechanisms of adoptive immunity against CMV are not fully elucidated. Recently, high-throughput next-generation sequencing (NGS) technology made it possible to shed light on the detailed and comprehensive landscape of T-cell receptor (TCR) repertoire. In this study, we analyzed TCR repertoire of CMV-specific cytotoxic T-cells (CMV-CTLs) in patients who suffered from CMV reactivation after SCT to clarify the diversity and dynamics of CMV-specific T-cell immunity.

[Methods] We sequentially collected peripheral blood mononuclear cells from patients with HLA-A*24:02 who received SCT in our institution. Samples were collected weekly or every two weeks from their neutrophil engraftment until approximately 100 days after SCT. CMV reactivation was evaluated weekly with CMV antigenemia test. CD8 and CMV pp65 tetramer positive cells were sorted and unbiased next-generation sequencing-based analyses of TRBV/TRBJ gene segments were performed at the timing of CMV reactivation in 16 patients, and TRA gene segments were also analyzed in 10 patients. In addition, TCR beta repertoires after 2-4 weeks were analyzed in 12 patients. In the 12 patients, the dynamics of TCR repertoire diversity and proportional changes of each clone were assessed. We evaluated the diversity by Shannon-Weber index, and we defined TCR beta clonotypes found in two or more patients using the same TRBV/TRBJ gene segments and CDR3 amino acid sequences as public. This study was approved by the ethics committee of Tokyo Metropolitan Komagome Hospital.

[Results] Among 16 patients, 11 received bone marrow, 3 received peripheral blood stem cells, and 2 received cord blood transplant. Underlying diseases were acute myeloid leukemia in 7, acute lymphoblastic leukemia in 7, and myelodysplastic syndromes in 2 patients. Median age at SCT was 50 years old (range: 20-71). Median duration from SCT to first CMV reactivation was 39 days (range: 16-55) and 7 patients (43.8%) were administered systemic corticosteroid at the time of reactivation (prednisolone 10-30mg/day). Median peripheral blood CMV-CTLs count at that time was 29.47/uL (range: 4.65-229.6). In most patients TCR beta repertoire of CMV-specific CTLs when CMV reactivated was highly skewed (median Shannon-Weber index was 1.44 [range: 0.542-3.164]). TCR alpha and beta were analyzed together in 10 patients and their diversity correlated well (p<0.001). Interestingly, 12 of 16 patients (75.0%) had at least one public TCR and, in all 12 patients with public TCR, the most frequent TCRs were public. Diversity of TCR repertoire was significantly lower in patients with public TCR compared with those in patients without (p=0.039). There was no obvious association between presence of public TCR and multiple events of CMV reactivation (p=0.57). When we evaluated clonal transition in 12 patients whose TCR beta repertoires were analyzed sequentially, the public clonotypes were continuously detected in 10 of 11 patients with public TCR and remained dominant in 9, while in one patient frequency of the most frequent public clone declined massively (from 50.25% among assigned reads to 6.63%). In addition, there were two patterns of subsequent clonal behavior in TCR repertoire of CMV-CTLs. In 10 patients, prevailing clones persisted and TCR repertoires of CMV-CTLs remained oligoclonal (Figure A). However, in other two patients, TCR repertoires of CMV-CTLs became more diverse (Shannon-Weber index at the time of reactivation and a few weeks after was 0.558/2.958 in one patient and 1.471/3.86 in another), major clones lost, and new private clones appeared afterwards (Figure B). Polyclonal pattern (TCR repertoire of CMV-CTLs was diverse at the time of reactivation or after a few weeks) was detected in 3 patients out of 16 patients, and the pattern was exclusively seen in patients who were administered corticosteroid when CMV reactivated (42.9% vs 0.0%, p=0.063).

[Conclusion] TCR repertoire of CMV-CTLs at the time of CMV reactivation after SCT is highly oligoclonal and frequently shared among different patients, but can dynamically change in a short period in some patients. Functional analyses of the dominant TCRs to understand their reactivity against CMV epitope and elucidation of the clinical significance and developmental mechanisms of clone shift are strongly warranted. 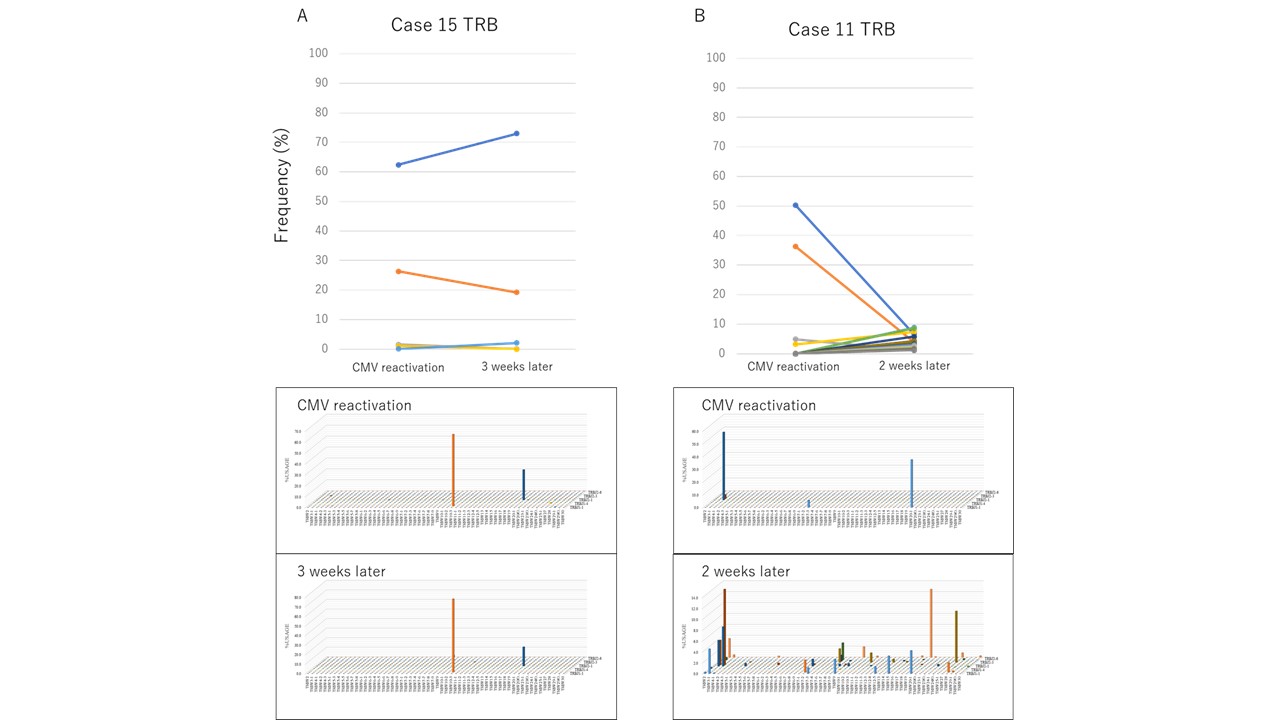