829 Updated Safety and Preliminary Efficacy Data from a Phase 1b Study Combining Venetoclax (GDC-0199, ABT-199) with Bendamustine/Rituximab in Patients with Relapsed/Refractory or Previously Untreated Chronic Lymphocytic Leukemia

BCL2 is an anti-apoptotic protein overexpressed in CLL and critical in the pathogenesis of the disease; venetoclax (VEN) is an orally available, selective BCL2 inhibitor. Bendamustine (B) and rituximab (R) combination has demonstrated efficacy in relapsed/refractory (R/R) and previously untreated (frontline, 1L) patients (pts) with CLL. Preclinical data suggest that VEN+BR may provide synergistic activity in pts with CLL. Clinical data from VEN, both as a single-agent and in combination with R, support VEN+BR combination in CLL. We report an ongoing phase 1b study (NCT01671904) that is evaluating as primary objectives the maximum tolerated dose (MTD) of VEN when combined with BR, plus safety, tolerability, and order of administration to reduce toxicities of this combination in R/R or 1L CLL pts.

Pts with ECOG PS ≤1, 0-3 prior chemotherapy lines, and adequate marrow, hepatic, renal and coagulation function are being enrolled in dose finding cohorts and subsequent safety expansion cohorts, ranging from VEN 100 to 400 mg/day (3+3 dose escalation design). Pts are assigned to one of two dosing schedules (Fig 1) with VEN (Schedule A) or BR (Schedule B) introduced first; both include a gradual VEN dose ramp-up and other prophylactic measures to reduce the risk of tumor lysis syndrome (TLS) and risk stratification for TLS (high, intermediate and low). On completing combination therapy, pts continue single-agent VEN until disease progression (R/R CLL) or up to 18 months (1L CLL). Dose-limiting toxicity (DLT) data are reviewed after all pts in a cohort have completed 21 days of combination treatment at the target VEN dose and focus on TLS and cytopenias. Efficacy is assessed by investigators (iwCLL guidelines; Hallek et al. 2008). 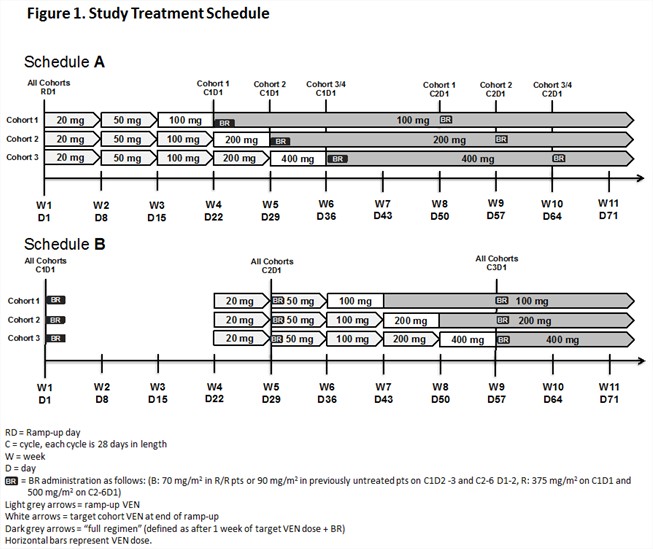 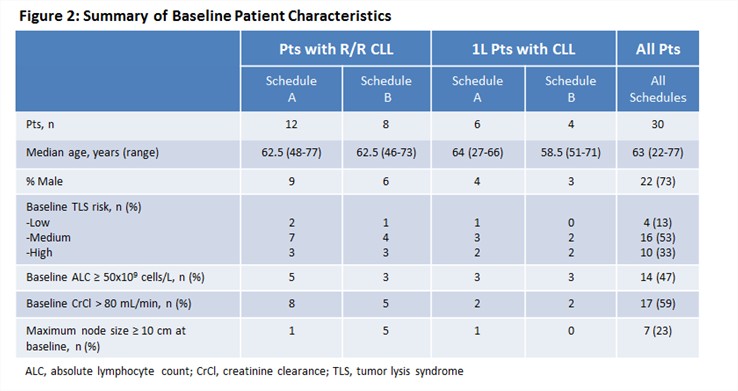 Of 30 safety-evaluable, 27 (90%) pts experienced any adverse event (AEs; Fig 3). Most common AEs were neutropenia and nausea. Most G3 AEs were hematological toxicities; common non-hematological included diarrhea and hypertension. No TLS events (laboratory or clinical) were observed. There were 13 serious AEs in 10 (33.3%) pts, 8 (26.7%) due to study treatment. No deaths were reported. Of all 30 pts, 25 received VEN, with 5 still completing the BR only portion of Schedule B. Dose interruptions were seen in 13 pts mainly due to neutropenia for both VEN and BR; 8 pts had a VEN dose reduction. Early drug discontinuations (any reason): VEN, 2pts (gastroenteritis norovirus, progressive disease); BR together, 3 pts; B, 7 pts (commonly for neutropenia or physician decision); R, 1 pt.

Across cohorts, 17/20 R/R CLL pts had response assessments; 100% responded, with 3 CRi. Response evaluation for 1L pts is early and evaluation across all cohorts and patients is ongoing. Full MRD data will be presented at the meeting, but early analysis shows pts exhibiting MRD negativity in peripheral blood, many as early as Cycle 4. 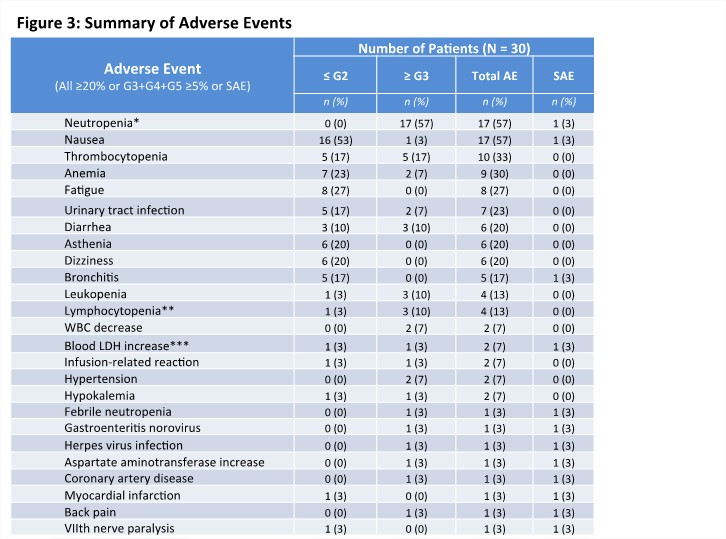 These early results report the first study evaluating the VEN+BR combination in pts with CLL. Daily VEN 400 mg can be safely combined with BR in patients with R/R CLL using both administration schedules (VEN or BR first), with 400 mg also established as safe for 1L pts with CLL under Schedule A. No TLS was observed with either administration schedule, despite many pts at medium (53%) or high (33%) TLS risk. VEN+BR is, as expected, associated with frequent hematologic toxicity, which appears manageable in most pts being treated, although 10 pts discontinued either B or BR prior to completing 6 cycles of administration. Early response and MRD data are promising.